In case you’ve somehow avoided this firestorm of blogger rage, here’s what the announcement has said: Facebook will begin prioritizing posts from friends and family over businesses, brands and pages in the news feed. Their reason? To prioritize “meaningful personal interactions”. (Side note: would a fist to the face count as a meaningful personal interaction, Zucky? Asking for a friend).

I encourage you to read Zuck’s original post here or the post from the official Facebook blog because anything else at this point is pure speculation, and the Interwebs is getting inundated by sensationalized headlines like the following:

A few things worth noting (before I hand out homemade Algo-pocalypse T-shirts):

And sure, this move is a money grab – plain and simple. We’re not dummies, Zuck. You’re not doing this because our lives are lacking cat pics from Auntie Sue. (Though yes, Whiskers does rock his bow tie). The truth is buried in a long likely convoluted explanation, of which advertising moola is no doubt a key factor.

If you, too, are shaking your fist in the air at the Facebook gods, take solace in this smugly satisfying headline from yesterday:

But all pettiness aside, there are reasons to be excited too. I know that’s a refreshing departure from my usual shtick as the human embodiment of a panic button, but this algorithm change could be a very exciting development in the world of social media. Why? It’s forcing us to adapt as content creators, getting rid of lame gimmicks/engagement ploys and bringing back the importance of genuine connections. Facebook is making it tougher to succeed, sure, but that’s just another opportunity to show them who’s boss 😉 You with me?

These changes are going to be rolled out over the next few months, so the end is not nigh. … Not yet, anyway. What you need to do is start implementing changes now to ensure that you’re set up for success when these changes hit hard. A few immediate action items:

And so slayers, I know we’re all in full panic mode right now, but besides those immediate action items above, this is what you should do moving forward.

Here's what we're talking about today...

The practice of just talking AT people and hurling content around like a rabid monkey is not gonna fly any longer. It seems like Facebook’s goal is to create genuine communities, which makes my Care Bear heart rather fuzzy.

As the official blog states, “page posts that generate conversation between people will show higher in News Feed”, so think about how you can bring your community closer together. I highly suggest thinking about your page content and how you can niche down. Your goal moving forward should be to find a tribe of people collectively obsessed about a certain topic, and building that community is MUCH easier when you have a narrowly defined focus.

So, for example: if you blog about travel, now’s the time to really consider WHAT kind of travel you are blogging about. It will be tough to build a community if your audience has some hardcore adventurers, some broke backpackers, some fashionistas, some confused grandmas who accidentally pressed “like”, etc. etc.

As we said before, link dropping is no longer going to cut it. Remember, Facebook likes to keep people on their platform, that’s why videos uploaded directly to Facebook show up more often than YouTube videos, and also why link shares usually get crazy low organic reach.

SO, think about what Facebook is asking for… they’re asking for you to start generating more discussion and conversation. AND they’d like for you to do that while keeping people on Facebook.

What’s the answer to this, my friends? Say it with me!

What are they NOT saying? They haven’t mentioned anything about “nice photos” or “blog posts”. They vaguely make reference to news being a conversation starter, but that’s it for text-based posts. What HAVE they repeated though…? Video.

But be careful with this one: it’s not just about any video content… Facebook seems to be making an active shift towards high engagement content that sparks discussion. This means that the way we leverage video on Facebook might look a little different moving forward. It’s still too early to tell, but it seems increasingly important to be using video as a vehicle for your stories, for your content and to grow your community (rather than just a passive piece of content for your audience to consume). Think to yourself: how can you create captivating video content that is not only interesting to watch, but sparks discussion too?

Diversify the way you reach your audience

This is especially true if you’re a “small” page. If you don’t have a big following on your page as-is, it will be very tough for you to get your content seen at all. That said, as we wrote about in our Facebook algorithm hacks post, there is SO much more to Facebook than having a page and there ARE ways to spread your content. That’s why moving forward, it’s important you diversify your Facebook reach!

Here are some things you can do:

Is it time to abandon ship and leave Facebook for good? Well sure, if you want to leave 2 billion monthly active users on the table. I hate to sound like a motivational poster, but in the face of adversity, we usually have two options: quit or adapt & persevere. Because I’m petty, and don’t want Zuckerberg to win, I’m definitely going for the latter… and as badass social slayers, maybe you should too.

So, what are your thoughts on this new feed change? Throw your questions, frustrations and angry shake fists in the comments below! 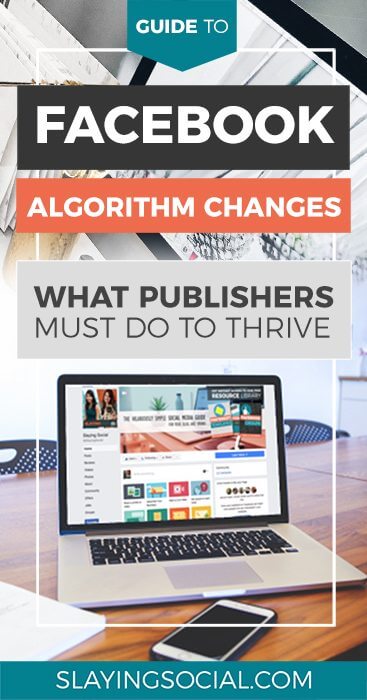 Almost there! Check your email to confirm your subscription and get access to our resource library.

11 thoughts on “WTF, Facebook? How to Conquer the 2018 News Feed Changes as a Publisher”