In honour of this special day, I’ve written you all a poem.

Yes, that’s right! Instagram is at it again with the super fun surprises. Pretty much overnight, follower counts across the globe dropped on IG, ranging in amounts from dozens to literal millions (for mega-celebs like Ariana Grande and Selena Gomez). The result? People are sharpening their pitchforks, and foaming at the mouth, demanding justice. In fact, if you want a good 1st world problem-induced chuckle, search up “Instagram followers” on Twitter and read some of the meltdowns. They’re great. 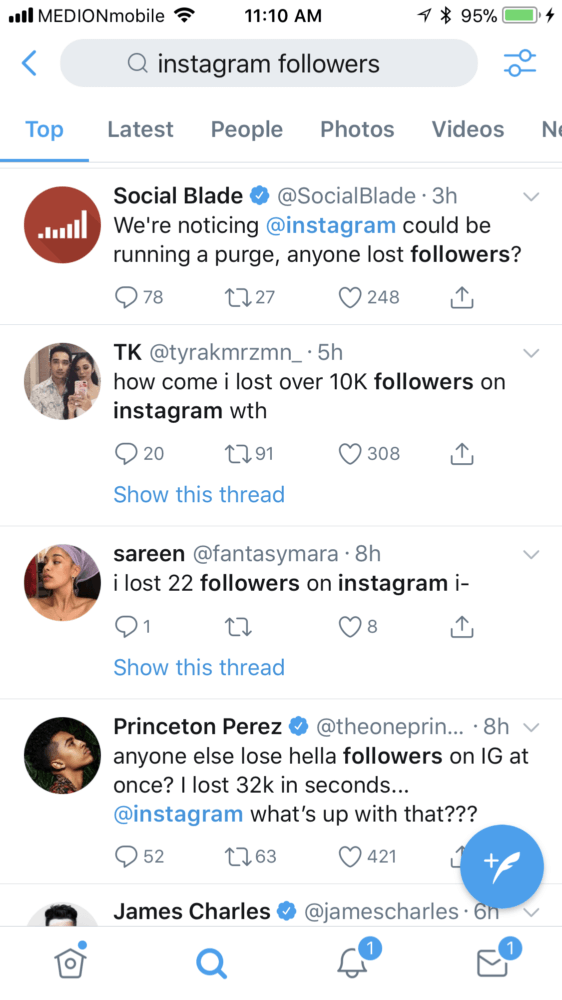 So why are people losing SO many followers? Is this another Instagram purge? That’s the reigning theory at the moment, that Instagram is simply cleaning spam/bot accounts, and lots of people have accepted that to be true.

I decided to dig a little deeper though, because I clearly have nothing better to do with my time.

Now, let me make one thing clear: at this point in time (February 13, 2019 at about 11am CET if we wanna get real precise), Instagram has NOT issued any official statements about what this mass follower loss is about… so anything you’ve read or heard so far is purely speculation, largely fuelled by the fact that people seem to take whatever’s on the Internet and believe it to be true. So yes, even the content of this post is purely speculative, just FYI.

Based on my digging, here are the two main possibilities, along with why you really shouldn’t be bothered by either of them.

POSSIBILITY A: The mass purge of followers is just a glitch

Yes, you can put those pitchforks down for a quick second. There’s actually quite a bit of evidence to suggest that all this might just be a glitch.

CLUE #1: Follower counts remain unchanged if you browse Instagram on the web

While I seemingly lost 600 followers when I look at my Instagram account on the app, when I search my profile online, my follower count is the same as it was last night. I searched up a few other influencers who claimed to have lost a bunch and their follower counts on Instagram web are much higher than on the app. This discrepancy is a little odd, and while it’s not conclusive evidence that the purge isn’t happening (maybe it’s just the purge that’s glitching!), it’s at least a little reassuring to see the numbers haven’t changed across the board.

CLUE #2: There’s several accounts of being “kicked off” following lists without consent

Twitter isn’t the greatest source of info but if you look at this super hot Twitter thread right now from beauty influencer James Charles (who lost 500k followers), there are quite a few people saying that they were booted off from his followers list without having ever unfollowed. These accounts weren’t deleted or purged, they were just randomly not following him anymore, even though they never chose to unfollow. This seems to hint that there’s something going on besides just a mass purge of bot accounts, because these accounts weren’t de-activated, just booted off from following James.

CLUE #3: Follower accounts are dropping all at once but at different times for different users

This one is a little weird, and purely based on my own experience, but when I woke up today, Lia had told me about the purge gossip and I smugly high fived myself thinking I had survived it. My follower count was unchanged from last night. Woo! I’m the greatest!

Then, while slurping my coffee, I refreshed my page again and there it was, 600 down, all at once. I find this a little odd. If they were wiping accounts, in theory everyone would have had their follower counts go down at the same time right? Or otherwise they would be going down gradually, and not in one fell swoop? Maybe I’m overanalyzing but that seems odd.

CLUE #4: People with bot accounts say they haven’t been shut down

There have been a few reported instances in Facebook groups (not naming them for privacy reasons) of people saying that they run thousands bot accounts and none of them have been shut down since last night. This seems a little fishy if there is a massive purge taking place, no? At least a few probably should’ve been shut down by it.

Another theory that people have been floating around is that IG is purging inactive followers. Well, my “personal” account that I haven’t touched in 5 years and literally forgot the password to, that’s apparently still alive and kicking, so I wouldn’t say there’s a ton of merit to that claim.

But hey, to play devil’s advocate, there’s evidence that this COULD be another mass Instagram purge, so let’s chat about that.

POSSIBILITY B: The mass purge of followers is Instagram removing bot, spam, and inactive accounts

Could Instagram actually be clearing accounts deemed as bots, spam or inactive? Well, it’s a possibility.

Clue #1: Instagram has done a massive purge of followers before

I mean, there’s a reason everybody is panic spiralling. An Instagram Purge isn’t unheard of. Most notably, there was the one in 2014 where millions of bot accounts were deleted. This was an intentional act that was confirmed by an Instagram spokesperson in this article. Apparently back then, Justin Bieber losing 3.5 million followers was front page news. So, it’s happened before, ergo it could happen again, especially because…

Clue #2: Instagram has (recently) made a very public announcement about cracking down on fake activity

Remember when we wrote this post about how Instagram was cracking down on bots? We called it the Abotcalypse… heh heh. Long story short, Instagram made an official announcement in Nov 2018 about how they were cracking down on fake activity like fake followers, 3rd party apps, etc. Well, not much has been publicly done since that big announcement, so this mass loss in followers could be the beginning. that said, it’s hard to know until we get an official word from the IG gods.

Why should you not be panicking about losing Instagram followers either way?

Okay so let’s go with Possibility A – it’s just a glitch. If that’s the case, then it’ll eventually fix itself and you can go back to agonizing over other IG problems, like whether to order your food based on taste or how photogenic it is.

BUT hey let’s pretend it’s actually Possibility B – the great Instapurge of 2019 is nigh. If this is true and you really have lost those dozens, hundreds or thousands of followers, ask yourself: why do you care about losing fake followers and robots? Sure, it might be a little bruising to the ego (I myself will be treating myself to a box of chocolates over my 600 follower loss) but at the end of the day, these people were not your ideal followers, they weren’t going to buy your products, like your posts, or generate any actual ROI for you besides giving you a shiny number to gloat about.

Remember, losing fake followers is good, and could (in theory) even help your engagement because more REAL people will be seeing your posts. So, breathe. It’s not a big deal.

Anyways, that’s the gossip for now. Until we hear more, I’d stay glued to Instagram’s Official Press page, a mysteriously under-utilized resource when it comes to IG updates. We won’t know for sure what’s up until we hear their official word, so keep that in mind!