Income Reports: some people love ’em, others think they’re tacky. Guess which one I am?

Spoilers: I LOVE income reports. And it’s not just because I’m nosy and like to know exactly how much everyone else makes and brag shamelessly about my own income levels. I feel strongly that income reports, and the transparency that comes along with writing them, are important for 2 reasons:

I find income reports empowering. And so, at the beginning of 2018, I wrote an income report for 2017 explaining how I earned $22,000 in my first full year of blogging on my travel blog, Practical Wanderlust. I got such fantastic feedback from readers who were inspired to monetize their own travel blogs that I decided to continue posting income reports for the entirety of 2018! I originally posted them on my travel blog, but Christina and I decided to move them over to Slaying Social where they’ve now found their forever home.

January marked my first month as a full-time travel blogger, and my goal this year – my second full year of blogging – is to see if this is a viable career path (or if I have to suck it up and get a real job again). I’m so excited to see where this crazy path takes me and I have no idea what I’m doing (yet), so come along for the ride! We can figure sh*t out together. It’ll be fun. And I’ll only panic about health insurance like, sometimes.

Hey, are you a travel blogger looking to monetize your blog? Sign up for the Slaying Social Email List and I’ll send you a FREE email course to help you monetize your own blog in just 5 days!  Subscribe below. Yes, in that giant box. With the big button. Go on, now, don’t be shy.

All righty. Let’s dive in! How much did I earn in April?

This is only a small increase from last month, but whatever, I don’t care because it’s nearly $6k and I might just keel over from excitement.

Let’s talk traffic! Context is important, and tracking my stats is just as crucial to understanding my earning potential and growth as tracking my income.

I make sure to do this every month because I don’t want anyone to compare themselves to me without an complete picture of how I’m achieving my income. A blog with 10k monthly traffic is at a totally different stage than a blog with 100k monthly traffic, and they shouldn’t be compared directly to each other because it’s just not fair.

For additional reference, my blog has been in existence now for 22 months, which means it’s still a fussy toddler blog. I can’t believe I’m nearing the 2 year mark already!

My page views this month barely increased, but I didn’t really expect them to. They should be staying right where they are until around late May or June, when people start seriously planning their summer travels. At least, that’s what I’m hoping.

If you’re the kind of person who pays attention to stuff, you might notice that my email subscriber number decreased pretty significantly, from over 7k to 5.5k. Did I experience a mass exodus of people after sending out a truly horrific email?

Well, no. I actually cleaned up my email subscriber list to get rid of dead weight and “cold” subscribers – folks who signed up way back when, but then never bothered to open any of my emails or take them out of the “spam” folder. Those subscribers aren’t doing me any good, and they actually cost me money. So I cleared out a massive chunk of them to save some cash and improve my email open and click rates.

Ok, enough chit-chat. Let’s get to the good stuff. I know this is why you’re here, and I”m gonna give you the goods. Here we go!

Let’s break down what worked and what didn’t.

What Worked This Month

Uhhh… this month is boring, y’all. I honestly don’t have much to say here. Everything was basically the same as last month, except my Amazon earnings in April were $400 more than March. In fact, if it weren’t for my Amazon increase, I would’ve had almost the same month in April that I did in March.

Everything else was just about the same as before. Even Mediavine only increased by a paltry $30. Don’t worry – I still love Mediavine, even if they didn’t pull $1,000 out of thin air for me like they did in March.

Oh, here’s a fun thing that happened: I forgot that I’d signed up for Amazon.co.uk ages ago, and then didn’t realize that they’d actually been sending me gift cards for months. So I finally added them all into my account – you can only use them for the UK Amazon site – and bought myself a FitBit. I still have some left over, too. So if anyone has any recommendations for good stuff you can get from Amazon.co.uk, I’m open to suggestions 😉

Honestly, my biggest miss in April is that I didn’t have time to actually publish anything. In the entire month of April, I only published 2 blog posts – and one of them was my income report, which barely counts since it’s pretty much just a copy/pasted template and a bunch of numbers. Yikes.

Why didn’t I post much in April? I was just crazy busy, honestly. We were traveling the entire first week of April to Utah and Los Angeles, and then a bunch of travel bloggers came into town and I spent all weekend with them, and then we left for a few days in Portland, and then I had exactly 1 weekend at home before taking another week off to go visit friends in Colorado. And in between each trip, I was running around like an insane person just trying to stay on top of my life.

Plus, I wanted to prioritize other things in April over publishing new content. Which was all well and good, until I realized it had been a month since I had published anything new and started freaking out about it.

So, yeah. Too much travel, not enough time for actual work. #TravelBloggerProblems, amirite?

But unfortunately, this is one of the realities of being a full time travel blogger – you don’t have nearly as much time to actually write stuff as you think you do! Oh hey, I’ve just published a blog post about that, plus a bunch of other things nobody tells you about being a full-time travel blogger. You should go read it.

Even though my Amazon income was up, most of my individual affiliate programs weren’t great in April. CJ, ShareaSale and AWIN continue to be massive disappointments, while SkimLinks continues to delight me. Which means that it’s time for a switch. I’m going to officially start removing non-performing affiliate links and replacing them with SkimLinks-friendly links, instead.

I still relied too much on passive income this month, but luckily that’s all going to change soon. During the summer I’ve got several paying gigs lined up, so I feel a little bit better about my lack of diversification.

How much money did I throw away this month? So much! This much:

We only took 2 trips in April. And to be honest, most of those travel expenses were for food. But somehow we still managed to spend $822. I guess I shouldn’t be surprised. Because I mean … have you met us?

Still, despite eating an impressive amount of food, we were able to take a net income of $4,905.65 to the bank this month, all from the blog. Wheee!

Um, spoilers, though: I spent like, all of it in May. But I don’t want to ruin this moment for myself, because this is my April income report. So WHEEEE!

One big change in our otherwise fairly predictable expenses is our host. We took the plunge and switched to Performance Foundry this month after a few incredibly stressful incidents with our site going down – all of which seemed to occur precisely during the times when we were traveling with no Wi-Fi. Ugh.

Our old host, FastComet, treated us well for almost 2 years. They were incredibly affordable and cost us almost nothing at $3 or so a month. But we outgrew them – in the past couple of months, we were getting daily warnings that our ever-growing bandwidth limit was about to be reached. Bandwidth limits being reached meant the site going down – a terrifying prospect.

We kept throwing money at the problem, hoping to buy more space and make the warnings go away, but for whatever reason, they didn’t. Besides, I didn’t like the idea that that my growth and success was a PROBLEM. I wanted a host that would value and celebrate the size of my blog, not threaten to shut me down constantly.

So I started researching. I found out that what I was experiencing is pretty common with blogs once they reach a certain size – cheap hosts, the ones we all start out with when we first buy our domain name and don’t want to part with a heap of cash, are made for baby blogs. Once your blog gets bigger, you need a grown-up host.

Performance Foundry is a grown-up host. They provide fully managed hosting, which is like having a team of tech experts at your fingertips. They handle things like site speed optimization, plugin updates and fixing broken plugins, making sure my site is never down (and getting it back up when it is, without needing to be called and yelled at), and even basic, minor coding fixes.

Like, I once asked them if they could recommend a decent contact form plugin. Instead of just recommending me a plugin, they built me my own. Um. What?! How rad is that?!

Switching over was totally painless – as in, they handled everything and I did nothing – and so far I feel that my $125 is money extremely well spent! I’m lovin’ the grown up blog life. If you’ve been having bandwidth problems, issues with your host, or you’re just getting to the point where you’ve outgrown your host (seems to happen around 100k+ monthly views or so) definitely give them a try!

Other than my new host, here’s a quick rundown of what I spent money on this month:

Well, that’s all, folks! What questions do you have about travel blogging, monetizing a blog, or starting a blog? Drop me a comment below!

Monetize your Blog in 5 days!

Do you want to monetize your travel blog? It can be super overwhelming to know where to start. In our FREE email course, we'll walk you through taking the first steps to monetize your blog in just 5 days!

Woohoo, you've signed up for the course! Check your inbox and make sure to add [email protected] to your address book so we don't end up in spam!

Lia Garcia / About Author
Lia Garcia is a travel blogger at PracticalWanderlust.com. Yes, she's aware that her name is a little bit reminiscent of Carmen Sandiego, but that actually wasn't intentional (it's her married name). She and her husband recently returned from a year long honeymoon, during which time they launched their blog and, much more impressively, didn't get sick of each other despite being all up in each other's space for a year straight. Amazing.
More posts by Lia Garcia 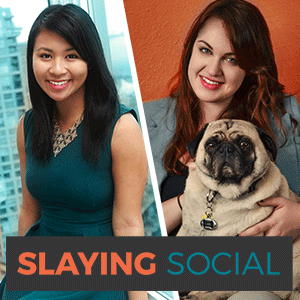 Welcome to Slaying Social! We’re Lia & Christina, 2 full time travel bloggers on a mission to help you slay your online presence. We create no-BS guides that empower travel content creators to make an impact… with practical advice and plenty of jokes to keep things interesting. Grab a beer and stay a while – we’re stoked to have you!